Lil Boosie Robbed Of 70K Of Jewelry. Apparently, someone broke into Boosie’s Bentley SUV. And, Boosie posted a very chilling message on IG.

Why did Boosie leave jewelry in his ?

Boosie told police that his super bowl style diamond ring, a rose gold ring with BOSSMAN and rose gold Cuban link chain with diamonds worth around 50k were all taken, as reported by XXL Mag. According to Boosie’s associate “B-Will ” he caught a young looking man reaching inside the car. The young man had broken the window. B -Will gave chase but was not able to catch the robber. Boosie then went onto social media to address the robber. Here is the message he left:

The police have footage of two black males dressed in black trying to get in Boosie’s car. So what must have alerted Boosie’s associate was the alarm. I really am having a hard time figuring out why Boosie would leave such valuable jewelry in his Bentley? Also, if I were the robbers I would be really afraid after Boosie’s message on Instagram. Clearly Boosie is going to recover the 70K in jewelry one way or the other. Especially, since Boosie has a lot of street credit in the hood. 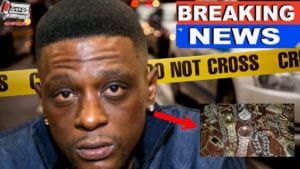