French Montana In Hospital With Heart Issues. The rapper Karim Kharbouch  aka French Montana was at his home when the police were called. Allegedly, there was a possible robbery. When police arrived French was said to be in excruciating.

French is still in hospital with severe stomach pain

Unfortunately, the doctors are not sure why French is having such severe pain in his stomach. Sources close to French say he was nauseated and his heart rate was elevated. Although, French is still hospitalized as of today, he is in awake and alert, as reported by TMZ. Some feel that French may have been exposed to contaminated food. In recent weeks French has traveled throughout the Middle East and Europe. I really hope that doctors can pin point what is going on with French. And, that he will recover soon.

The Moroccan born rapper is famous for his debut mix tape in 2007,”French Revolution Vol.1. Also French’s song  “Choppa Choppa Down”, put his name on the map in 2010. French has collaborated with Rick Ross, Waka Flaka, Fat Joe and Akon. Some are reporting that French may be released form the hospital really soon. A lot of  French Montana fans have expressed well wishes to him on social media. Hopefully, French can recover quickly and give fans more good music. 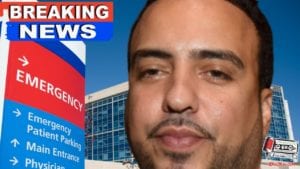