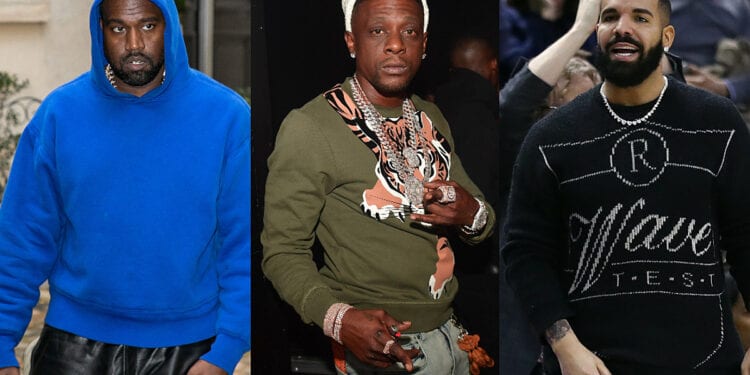 Boosie Calls Out Kanye For Dissing Drake. In Kanye’s latest rants on social media he mentions Drake. Why is there always a problem with Kanye and Drake.

Boosie calls out Kanye for dissing Drake. In a series of rants on Twitter Kanye got in trouble with Boosie Badazz. Although, Kanye was trying to help his fellow rappers. His comments about Drake were misunderstood. We all know that there has been issues with these three men. However, I think Kanye has good intentions. In fact, Kanye is willing to assist with other rappers obtaining their masters.

However, Kanye should not have left Drake out of the equations. It appears that Kanye was only joking with Drake. But Boosie did not take Kanye’s rant well. In response to what Kanye said Boosie fired shots back, as reported by XXL Mag.. Here are the comments that Kanye made:

“WE’RE GONIG TO TRANSPARENTLY CHANGE EVERY ALBUM DEAL EVERY PUBLISHING DEAL EVERY MERCH DEAL EVERY TOURING DEAL EXCEPT FOR DRAKE’S DEALS,” Kanye tweeted. “JUST KIDDING … I LOVE DRAKE TOO … ALL ARTIST MUST BE FREE.”

Clearly, Boosie did not think Kanye was joking. Here is what Boosie fired back with:

“”@kanyewest WHY U CANT KEEP DRAKE OUT YO MOUTH BRA,” Boosie questioned on Twitter. “IM GO SAY IT #stophatin #stophatin smh YOU SHOWING STR8 JEALOUSY N YOU AINT EVEN GOTTA DO THAT. U RICH RICH NIGGA. SMH.”

So, you can see that Boosie has gotten right in the middle of the ongoing beef with Kanye and Drake. The sad thing is Kanye appear to be genuine about helping other music artists. I haven’t seen any other rapper be concerned. With that said, I think Boosie should chill. Also, I did not see where Drake commented about the situation. Even though Drake did like Boosie’s post. Where will this foolish behavior end. 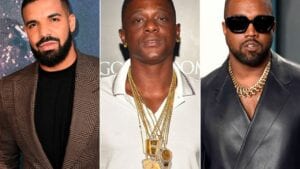