Pusha Reveals Why Verse Was Cut From Ricks Album!!!

Pusha reveals why verse was cut from Rick Ross album. Apparently, know one wants to admit that Pusha’s verses may have out done everyone else on the album. And, it appears that Pusha may have fired shots at Rick’s boy Drake.

Fans are still not buying why Rick Ross cut Pusha’s verses from Maybach Music VI. Fans were eagerly anticipating Wayne and Pusha collaboration. However, Ross said it was not the right time.  Rap battles have always been the core of hip hop. Apparently, the beef with Pusha , Drake and Wayne is still alive. Otherwise, Rick would not have cut Pusha’s verse. Pusha spoke with his friend Joe Budden on Revolt TV to tell his side of what happened. Pusha laughed, then said this:

“We are here to rap, bro. That’s what I’m here for,” he said. “We all have to do what we do best. I have to do what I do best. the next guy gotta do what he does best. It’s lanes for everybody…I’m okay man, It’s part of the game. I can’t complain about it, I mean at this stage in my career…hey!’

Pusha did not mention Lil Wayne or Drake during his conversation with Joe. And, Pusha did not appear to have any animosity towards Rick.  Perhaps, Rick was trying to keep the peace. And, Pusha really is confident in his ability to obliterate his opposition. 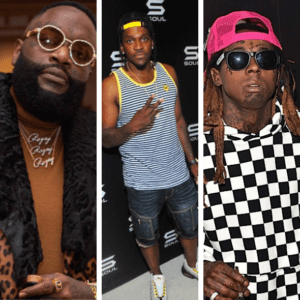