Nicki Minaj Checks Safaree For Claiming He Was Her Ghostwriter !! 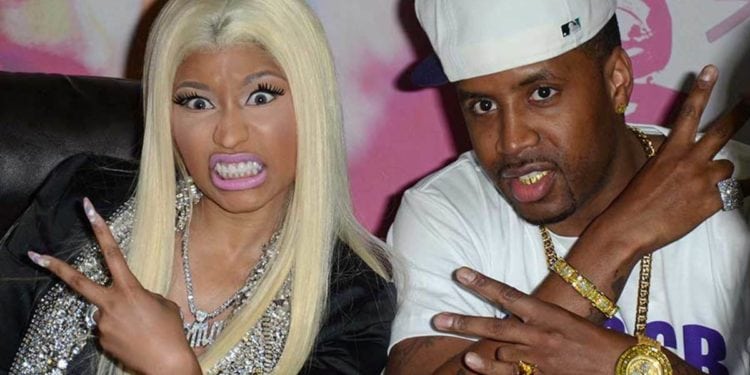 On another Uncensored Truth Podcast host O’God and Sam Ant talked about how Nicki completely shuts down rumors of Safaree writing instead of her. Minaj tells Funk Master Flex that Safaree was never her ghostwriter. She was adamant in her response. Nicki was once romantically involved with rapper Safaree.

However, she was very clear that Safaree did not help her career. In fact, she was upset that Safaree keeps getting the credit for her work. She told Funk Master Flex people really believe that a female is incapable of writing their own lyrics. Really! And of course she used a lot of expletives in her rant.

Does Minaj have a point about female rappers writing their own rhymes?

Historically, female rappers have had it difficult, especially when it comes to proving they can rap as well as write their own lyrics.  Why is it so hard to believe that women can spit rhymes and create them with as much passion, depth, and versatility? Can it be that machismo views crossover in hip hop culture and music as it does in other genres?

Minaj came into the rap game when a lot of women were not being celebrated for their great contribution to Hip Hop culture and music. Don’t get it twisted. Great female rap icons such as Queen Latifah, Mc Lyte, Salt n Peppa, Lil Kim, Eve, Missy Elliott and Lauren Hill have all had great success but Minaj had a different strategy. And it worked. She appeals to both men and women. Whether people will  admit it or not Minaj took the female rap game to yet another level. Hot 97’s Jill Strada had this to say:

“Female MCs can definitely benefit from Nicki Minaj’s success,” Jill Strada, Music Director and Assistant Program Director at New York’s Hot 97 radio station, said. “It’s hard for females in hip-hop to appeal to both men and women, but Nicki has accomplished that. People were hating — they’re still hating — but she’s doing her thing. She rocked it on a lot of other people’s songs, then she had to prove that she could smash on her own album and I’d say she’s proven herself. But that’s the easy part, let’s see if she has what it takes to stay.” -Jill Strada

Minaj does not take credit for bringing female rap to the mainstream. In fact, she went on social media in 2017 to correct her haters:

I see ppl remixing my words so let me post "exactly" what I said for the intelligent ones in the back. Now, if you can find the part where I said "I made female rappers mainstream", I'll give you $100,000.00. 😅 blogs & tv shows don't care to do actual research these days, they only care about what grabs your attention… at anyone's expense. Imagine me saying I made female rappers mainstream when there were so many women who already had platinum albums under their belts. 🙃 Lauryn sold 10 million off one album, Eve had platinum singles w/Alicia, Gwen Stefani, her own tv show & clothing line. It doesn't get more mainstream/pop than Missy's biggest singles. Foxy&Kim had platinum albums & shaped the sound of NY female rappers, Latifah had her own sitcom, Trina was on billboard with hits, etc-🙂 I appreciate the love but I never said that. 🦄🦄🦄 now what I DID say is right here for anyone w/their own brain to decipher words on their own. I know it's hard in the social media band wagon era, but try. It's fun. 🙈. When I came out, there had been a drought of a few years where NO female rap album had gone platinum, females weren't getting budgets, the industry did NOT believe in the female rapper anymore. They had stopped generating MONEY for labels. Ask any rap historian or just anyone with a brain. These are facts and nothing but the facts. So I "REINTRODUCED" the "successful" female rapper back to POP CULTURE. Showed big business we were major players in the game just like the boys were. ♥️😍😘 love you guys for holding me down but what's true is true & whats not is just simply not. 🙂 update your blogs & tv shows with what I actually said please 🙄🤣. I can't believe this lil interview made it to tv. Haha. See u guys on tour next year. I got a cpl BIG surprises. AHHHHHHHHHH!!!!!!! 😘

Clearly, Minaj has the right to blast Safaree for continuing to take credit for her hard work. Anyone who has worked as hard as she has deserves her own credit. Let’s not forget Minaj has been in the game for more than ten years. Certainly, she has proven her worth as a fierce competitor.