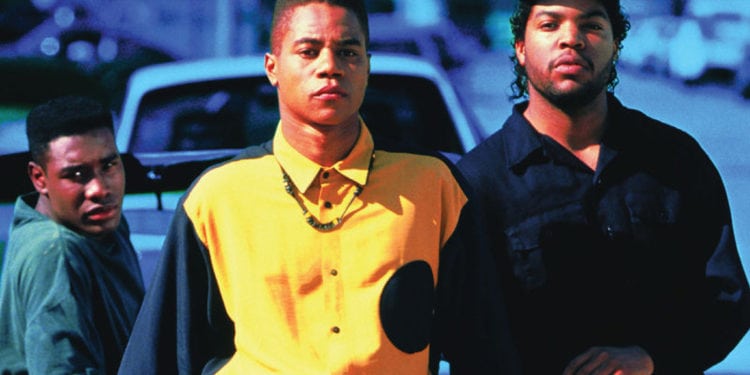 Boyz N The Hood was filmed in the then district of South Central Los Angeles, California from October 1 to November 29, 1990 and was released cinematically in the United States on July 12, 1991. It was nominated for both Best Director and Best Original Screenplay during the 64th Academy Awards, making Singleton the youngest person ever nominated for Best Director and the first African- American to be nominated for the award.

The United States Library of Congress deemed the film “culturally, historically, or aesthetically significant” and selected it for preservation in the National Film Registry.

Ten year old Tre Styles live with his single mother, Reva in Inglewood, California. After Tre gets into a fight at school, his teacher informs Reva that Tre is highly intelligent but has a volatile temper and lacks respect. Worried about Tre’s future, Reva sends him to live in the Crenshaw neighborhood of South Central Los Angeles with is father, Jason”Furious” Styles, from who she hopes Tre will learn valuable life lessons and to be able to mature, but assures him he will be permitted to return to her one day.

In Crenshaw, Tre reunites with his friends, Darrin “Doughboy” Baker, Ricky Doughboys brother, and Chris, their mutual friend. The movie fast forwards to their teen years where Ricky and Tre are now best friends because Doughboy was sent to youth reform after he and Chris were caught stealing. Ricky was a local football star who was hoping to receive a scholarship so he could go to to college and play. Ricky was also a teen father living with his single mother Brenda.

Tre was in love with Brandi who went to Catholic school but lived across the street from him and Ricky. This movie really described hood life and the daily struggle to live and survive in a crime ridden neighborhood.

Rapper Ice Cube showed that not only was a great rap artist but his acting ability was really good for a new beginner. This film was certainly one of the greatest black hood films. The soundtrack was really good!