Kim K West Trying To Prevent Rodney Reed Execution. Kim has taken a really bold stand to help this death row inmate. And, this is not the first time Kim has used her voice to assist in getting people out of prison.

Kim is working tirelessly to get clemency for Rodney Reed. If Kim is not successful Rodney will not have a chance. Kim spoke with Rodney last week to ask about details in the case. According to Kim, there may be evidence that could exonerate Rodney. Rodney was convicted for the murder of Stacey Stites in Texas, as reported by The Source. Police say that Rodney raped and strangled Stacey to death. However, Rodney has continue to say he is innocent. Rodney has been in prison on death row for 20 years.

Rodney claims that a former inmate says he knows the killer. Arthur Snow filed a statement which implicated another person for the murder of Stacey Stites. After, this new information appeared Kim and other celebrities such as Rihanna have spoken out against Rodney’s execution. Kim has reached out the the Governor Abbott so that new evidence in the case can be heard. Also, Kim hopes to get clemency for Rodney before his execution date which is on November 20th. At the least, Kim could get the case re-opened. This will give Rodney a chance to have his case heard. Hopefully, Kim trying to stop Rodney’s execution will be successful. 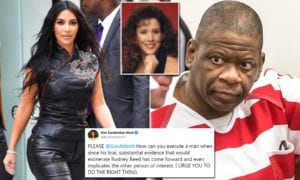