YG Arrested ahead of Nipsey Hussle Trible. On suspicion of robbery, the cops showed up at the doorstep of his home in San Fernando Valley with a warrant during the wee hours of the morning, about 4 a.m.

YG is being transported to jail. 29-yar old rapper, actor and songwriter, Keenon Daequan Ray Jackson, better known as YG is in custody. All this on the eve of his scheduled performance to honor the late Nipsey Hussle at the Grammy’s on Sunday night.

According to authorities, he was arrested on suspicion of robbery based on an ongoing investigation. His attorney, Joe Tacopina had this to say about the arrest of his client –

“This has become even more outrageous … normally, in the American justice system, you get arrested after an investigation is completed. The motives here are pretty clear.”

“This arrest is one that caught YG completely off guard because there is no truth to them. YG has no idea what investigators are talking about and we have not been provided with any details … we are learning about this case through the media.”
“Rest assured, my client will be cleared of all charges, if they even survive past the arraignment.”

Additionally, raising more questions about motive, and timing of his arrest, Tacopina says –

“YG has a performance scheduled at The Grammy’s Sunday where he will honor Nipsey Hussle … so the timing is suspect, to put it mildly.” 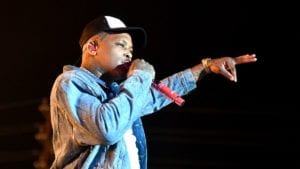 Do you believe that his arrest is suspect?
For more Entertainment News check out Hip Hop News Uncensored. It’s the best YouTube channel for Hip Hop.
Previous Article

Timbaland Speaks On His Prior Pain Pill ...

Chance the Rapper Is New Host Of ...