” Whoa’ Instagram Removes Pusha T’s Photo Of Drake’s Blackface!  This story is all over the media outlets. Pusha T take direct shots at Drake. Damn, Drake, really, you have the audacity to dress in blackface!

The beef, feud, or whatever you call it  has re – ignited between rappers Pusha and Drake. Pusha released a brutal dis song on Tuesday night. This song really throws Drake under the bus.

And that’s barely skimming the surface. “The Story of Adidon” — unleashed after Drake mentioned Pusha’s fiancee in this past weekend’s “Duppy Freestyle,” which was itself a response to Pusha resuscitating the Drake ghostwriting drama on his recent album “Daytona” — uses an old real  photo of Drake in blackface for cover art.

Drake must have lost his mind! Doesn’t he realize what “Blackface” represents. 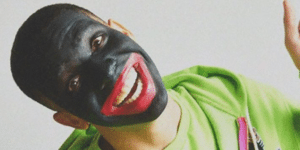 Blackface was and is a form of theatrical make-up used predominantly by non-black performers to represent a caricature of a black person. The practice gained popularity during the 19th century and contributed to the spread of racial stereotypes  such as the “happy-go-lucky darky on the plantation” or the ” dandified coon”. In 1848, blackface minstrel shows were an American national art of the time, translating formal art such as opera into popular terms for a general audience. Early in the 20th century, blackface branched off from the minstrel show and became a form in its own right, until it ended in the United States with the Civil Rights Movement  of the 1960s.

Terrence LeVarr Thornton, better known as Pusha-T, is  a rapper and record executive.  He initially gained major recognition as half of hip hop duo Clipse,  alongside his brother Gene “No Malice” Thorton, with whom he founded Re – Up Records. Thorton signed to Kanye West’s, Good Music, In September 2010, under the aegis of Def Jam Recordings. Pusha released his first solo project as a mixed tape titled, “Fear of God” in October 2013. Following the mix tape Pusha released his debut album, “My Name Is My Name. Kanye appointed Pusha to take over the role of president of Good Music in November 2015.

The Truth Behind the Ongoing beef with Drake and Pusha T

Is this form of beefing going to bring back fans to  Hip Hop? Or is it going to increase sells as Hip Hop Heads rush to purchase the dis tracks? Certainly, it is healthy competition that keeps rappers up on their game. Who doesn’t like competition?