Rap legends Nas and Biggie freestyle on stage. These two Hip Hop legends never got a chance to collaborate on a song. Clearly, Nas and Big had chemistry, according to ambrosia for heads website. Nas and Big had a dope flow going in this beat. Nas had this to say about the late great Notorious BIG:

” Biggie had his foot on everybody’s necks from a musical standpoint,” We needed him,” Nas says. “He had the game in a chokehold.” Also, mentioned, “Biggie was definitely not just Alfred Hitchcock, he was Stanley Kubrick,” He was Langston Hughes…He had the look. He had the presence, the vocal presence and physical presence on stage. He looked like a king. He was the true king of Hip Hop.” 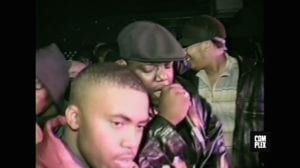