An Examination of Bobby Tarantino II, Through a Centennial’s Point Of View 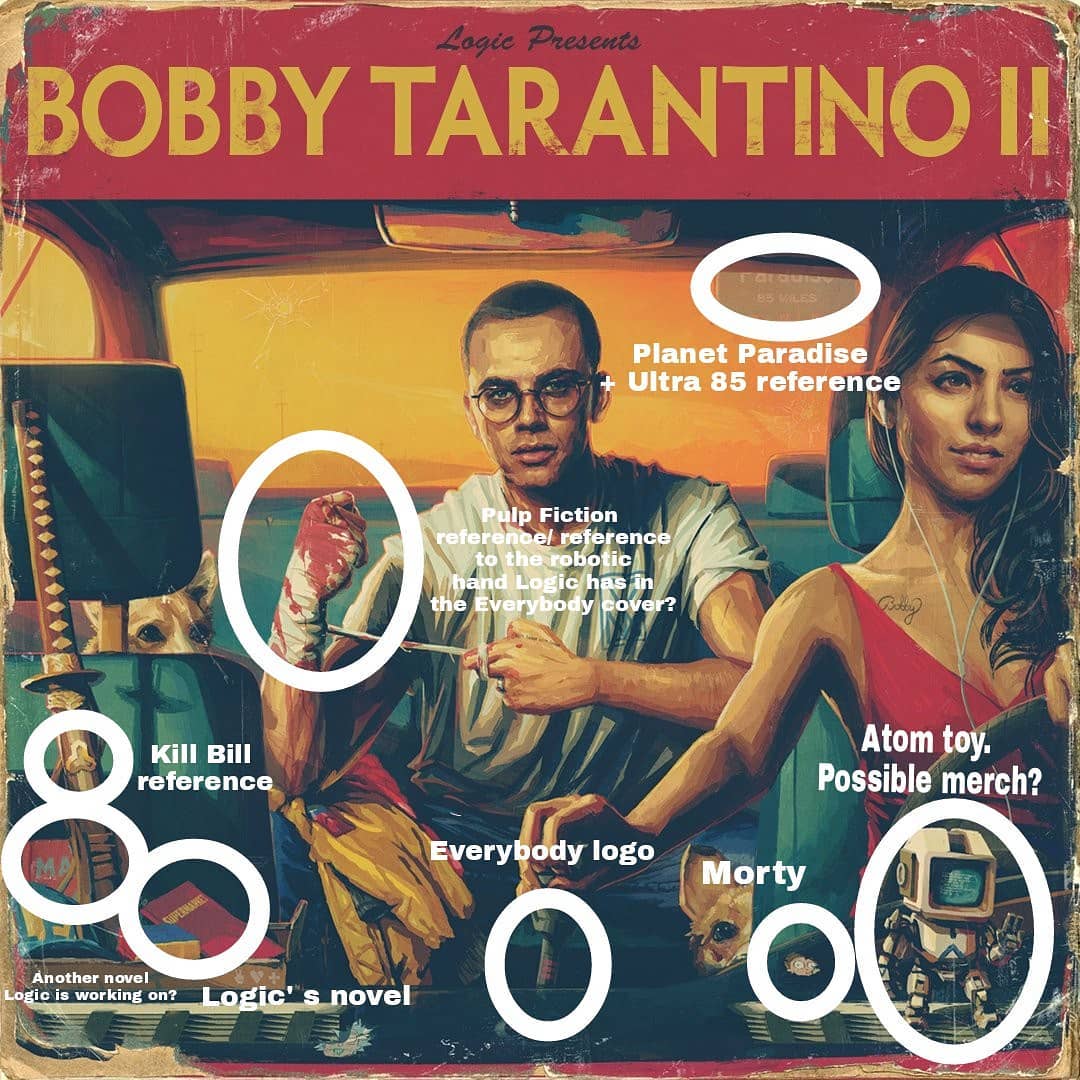 An Examination of Bobby Tarantino II

If you’ve read my other articles, you would know that I am a HUGE Logic fan. I mean, he has been my favorite rapper since I’ve heard his first album, Under Pressure. And recently, he has proven to the world how he should be everybody’s favorite rapper. Last year, his album, Everybody, stunned the world, with it hitting Gold within 2 weeks of it’s release. It was so popular that, one of the songs, “1-800-273-8255” hit double platinum and put him in contention for a Grammy.

But Where is Bobby Tarantino?

So, immediately after, the world was finally exposed to the greatness of Logic’s music. Well recently, Logic released the sequel to his 2016 Mixtape, Bobby Tarantino. The release of this mixtape immediately was responded with tons of publicity and popularity, with all of the songs from the Mixtape being on Spotify’s top 25. Anyways, this Mixtape has many, many meanings and symbolism from it’s songs to the cover art of the mixtape.

One of the most listened song in the mixtape, “Yuck“, has a very significant meaning behind it. You see, Joyner Lucas, another rapper attempted to start beef with Logic over a year ago. And obviously, Logic didn’t respond to what Joyner was saying about him. But finally, after a year, Logic responded to Joyner very cryptically, in these lyrics.

“Talkin’ shit ’bout Logic, I never respond
I’ll let success talk, ’cause a word of advice
More achievements for yourself and less talk
Cats beef with Logic, yeah, they prayin’ I respond
If I ever did, I dead you in this game with no respawn
Peace, Love, and Positivity that’s all I want with you
But you push the issue ’cause I give you more press than your publicist could ever get you
Hell nah, fuck rap, fuck beef, anyone that hate me, I wish you success
I wish you look in the mirror and ask yourself why you supressed
If feelings of self-hatred that you wan’ project on me
Bet if I never picked up the mic then we might be homies
But you jealous, you look at my life and you feel envy
Constantly comparing yourself to me and feel empty
Most people that don’t fuck with me ain’t ever shook my hand”

Read it over again. Logic just DEMOLISHED Joyner Lucas. If you don’t understand what those lyrics were saying, Logic pretty much told Joyner that he wishes the best for Joyner because the only reason that Joyner is getting publicity is because he is talking about Logic. He is always using Logic’s name to get popularity for HIMSELF. After that, he says that he hopes that Joyner Lucas looked into the mirror to see that he actually hates everything about himself, and he is projecting that self hate onto Logic. He only feels envy towards Logic and wishes that he could possess what Logic has. It might be a nice way of telling someone that they are jealous of you, but Logic just pulled the best move to stop beef. (at least in my book).

Another very significant song in this Mixtape is definitely “Warm It Up“, which has Logic revisit his old alter ego, “Young Sinatra” in this song, I seem to see a different meaning than all of the other annotation site. (mainly Genius). In the song, Logic flips from the Trap style of Rap to the original Hip Hop version. In the song, when he is flipping to Trap, he says this:

Fuck that rap shit, this that trap shit (Bobby!)
This world is my contraption (Bobby!)
I was born and raised in the trap, son (Bobby!)
Talk shit, get kidnapped, son (Bobby!)
I don’t really know why I rap, son (aye!)
Money in the bank, yeah, I got some (aye!)
Couple sports cars, yeah, I bought some (aye!)
Logic never flex, Bobby get it done! (aye!)
Yeah, y’all don’t really know where I come from (come now)
Talkin’ that shit, I’ma come for ’em (what’s good?)
Tell me what you really know about me right now
Anything I want, I get it somehow

I see this line of Lyrics as Logic rapping about the reality of Trap music. In the lyrics, Logic says, I don’t really know why I rap, son….Couple of Sports cars, yeah, I bought some. To me, this sounds like Logic is dropping some commentary on the whole style of Trap music, along with the people who rap it. In my perspective, Logic sounds like he is attempting to say that Trap musicians only talk about how they have so much money and that they have tons of sports cars. Because of this, Trap musicians don’t know any other reason why they rap.

Another bit of symbolism in the mixtape can be found in the cover. Logic has been known to drop many, many Easter Eggs in everything, about his music. One of the most frequent instances of Easter Eggs is in the covers of his albums. This one is probably the most significant Easter Eggs in his album covers, with him teasing his next album, Ultra 85, in it.