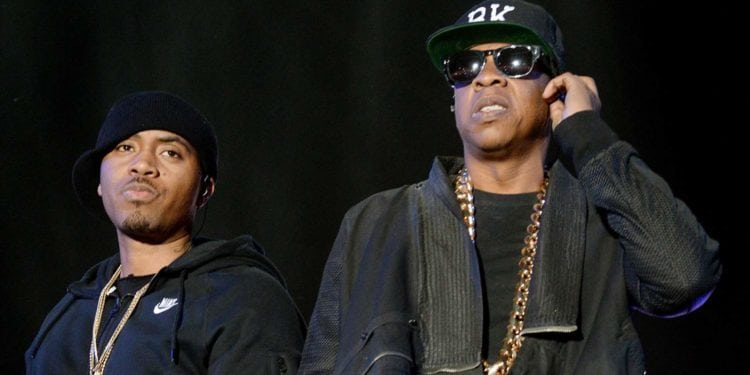 Many say Jay Z is the one of greatest rappers of all time. However, others say that Nas is one of the greatest rappers who ever lived.  It all depends on what style of rap you like. Clearly, each rap artist can smoke a mic.

Okay Hip Hop Heads, let’s compare notes. Jay Z verses Nas, who  would really win? Is is possible to settle this debate?  If you are really a Hip Hop Head then you will have to agree that it is very difficult to make a choice between the two. Jay Z has kept reinventing himself over and over again. And Nas is a beast! Check out both resumes, you be the judge?

Nasir Bin Olu Dara Jones ,better known by his stage name Nas is an  rap artist, record producer, actor and entrepreneur. Nas has released eight consecutive platinum and multi-platinum albums and has sold over 25 million records worldwide. He is also an entrepreneur through his own record label; he serves as associate publisher of Mas Appeal magazine and is the owner of a Fila sneaker store.

His musical career began in 1991, as a featured artist on Main Source, “Live at the Barbeque.” His debut album Illmatic (1994) received universal acclaim from both critics and the hip hop community and is frequently ranked as the greatest hip hop album of all time. Nas was named one of the top 5 rappers on their greatest MC list.

Ayo, I know you ain’t talkin’ about me, dog

You been on my dick, nigga

You love my style, nigga

Will Teach you  – the king- you know you

Not God’s Son across the belly

Lose, I prove you lost already

Brace yourself for the main event, y’all impatiently waitin’

It’s like an AIDS test, what’s the results? Not positive

I embrace y’all with napalm

How could Nas be garbage” Semi – autos at your cartilage

Burner at the side of your done, come out of my throne!

I got this locked since 9-1, I am the truest

Name a rapper that I ain’t influenced

Gave y’all chapters, but now I keep my eyes on the Judas

With Hawaiian Sophie fame, kept my name in his music

Shawn Corey Carter known professionally as Jay Z  is a rapper and businessman. He is one of the best selling musicians of all time, having sold more than 50 million albums and 75 million singles worldwide, while receiving 21 Grammy awards for his music. MTV ranked him the “Greatest MC of all time in 2006.

Jay Z The Take Over

R.O.C, we runnin this rap shit

B. Mac, we runnin this rap shit

Freeway, we run this rap shit

Oh and Sparks,, we runnin this rap shit

Chris and Neef, we runnin this rap shit

The takeover, the break’s over nigga

R.O.C. too strong for why y’all

It’s like bringing a knife to a gunfight, pen to a test

Your chest in the line of fire witcha thin-ass vest

You bringing them Boyz II Men, How them boys gon’win?

This is grown man B.I. get you rolled in the triage

Roc-A-Fella is the army, better yet the navy

Niggaz’ll kidnap your babies, spit at your lady

We bring – knife to fistfight, kill your drama

Uh, we kill you motherfucking ants with a sledgehammer

So you won’t confuse it with just a rap music