Colin Kaepernick is no pushover. Remember the commercial about EF Hutton” When EF Hutton talks people listen.” Well, when Colin talks, Nike listens. Nike’s creative team probably did not see the backlash coming. Especially, since it was a special edition to commemorate the day which celebrates US independence. However, Colin quickly reminded Nike the sneak was offensive because of its connection to slavery. The flag in question was sewn by Elizabeth Griscom aka Betsy Ross. The old American Revolutionary flag does not represent all Americans today. Therefore, Nike agreed with Colin Kaepernick and stopped production of the sneakers, according to TMZ. And, Nike pulled sneakers from retailers, as well. While some would disagree with Nike’s decision, it was absolutely the right choice. 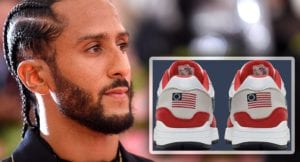