The movie Scarface came out in 1983. It was and still is a classic gangsta flick. Al Pacino played the character Tony Montana who was a Cuban refugee. He lands in Miami during the reign of  dictator Fidel Castro  who took over the Cuban government in the 1970’s. Many Cubans feared they would lose control of their lives under Castro’s rule. Over one million immigrated to the United States. This started the beginning of the alleged Cuban crime wave in Miami, Florida. 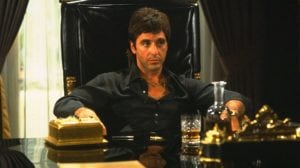 Movie director, Brian De Palma took a lot of heat for this movie but people could not help but falling love with the character, Tony Montana. Hence the story of Tony Montana (Scarface)

Even though , when Scarface came out there were mixed reviews. The Cuban community did not want others to think they were all gangstas and drug dealers. However, young people in the hip hop community loved the film.  A lot of rap videos play clips from Scarface and emulate the characters portrayed in the movie. This movie set the stage for the crime film genre.